So, we’ve heard that poor lifestyle habits can lead to heart disease.  We’ve also heard that we are what we eat.  Is that really true?

There is such overwhelming evidence that poor lifestyle habits, such as eating junk food high in sugar, salt, and fat, and leading a sedentary lifestyle, can significantly increase your risk of heart disease.

If you’ve made it this far into this site, you probably agree, or are at least interested in learning more about adopting a diet to help prevent heart disease.

The problem with “diets”, is they just don’t work.  Ask almost any workout personal trainer.  They may call their meal plan a “diet”, but a diet is temporary.  To truly lose weight, or in this case, prevent or clear out heart disease, you can’t just go on a temporary diet.

It needs to be a change in lifestyle.

It’s not that hard, folks.  You learned how to eat all that junk food garbage, so now you can re-learn how to eat genuine clean-burning, tasty, edibles.

You don’t have to be vegan to eat healthy, but it doesn’t hurt to have at least 2 plant-only meals each week.

If you just can’t give up red meat and chicken, try to purchase only organic, free-range meats.  Not only are you supporting sustainable farming, your consuming clean, happy meat.  I’ll leave it up to you to go look up all the terrible videos of commercial livestock practices.  I’ve seen them.  I don’t need to go through all of that again.  So, I’ll move on.

So now we have Vegetarians, Vegans, and Pescatarians (fish eaters).  What’s the difference?

A Vegetarian is a person that eats primarily foods from plants, but might eat eggs or dairy, such as cheese.  There are numerous variations on the vegetarian diet, but primarily it is plant-based with dairy. 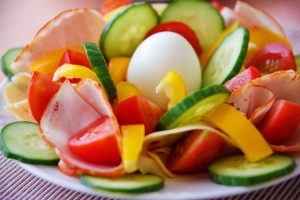 A Vegan is a person that eats foods from plants, but no dairy, meaning no eggs, milk, or cheese.  In other words, they don’t consume anything that has a “mother” or a “face”.   I know, that’s pretty tough stuff. 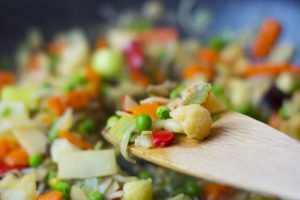 There are some that argue that honey is not allowed either, because it comes from bees, which kind of have a face, but do they have a mother?  I guess that one could be debated forever.

And then there are the Pescatarians.  A Pescatarian is a person that does not eat meat, but does eat fish.  Some Pescatarians will eat eggs, or egg whites, and some dairy, such as cheese and milk.  It’s an expansion on the vegetarian diets without red or white animal meats. 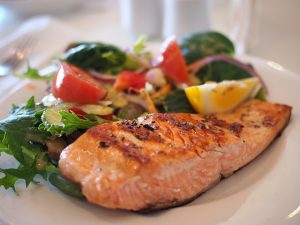 In my opinion, there is no right or wrong answer here.  I can only tell you what is working for W and I.

We never added any oil when cooking a meal.  Any “frying” (if you could call it that) was done using either water, vegetable broth, or vinegar as the liquid for frying the food.

But wow, did it work.

W lost 150 pounds in about 2 years during his no sugar, salt, or fat phase.  I, too, lost 25 pounds, but I wasn’t nearly as disciplined as he, and I wasn’t as overweight either.  But, he was the one motivated to clear out his arteries, so he never made an exception.

After about 2 months, W started seeing an improvement in his cholesterol numbers.  The doctors encouraged him to continue on his strict vegan diet and continued to check his lipid panel (his cholesterol readings) every 4-6 months.  Each time, his Total Cholesterol and LDL went down (the way they should) and his HDL went up (just like it should).  His blood pressure started coming down, and the weight started falling off of him.

After about 2 years, the doctors started encouraging him to add just a little bit of healthy fats back into his diet.  That meant he could start eating nuts, avocados, and a little bit of nut butter such as almond butter (rather than peanut butter).

After about 3 years, as things continued to progress, he was encouraged by his cardiologist to add fish to his diet.  We started with salmon, and then branched out into cod, halibut, flounder, and crab.

If you’re allergic to seafood, this won’t work for you.  But if you are able to eat fish, then adding some healthy fish to your edibles is an excellent way to get a big boost of protein.

So now, 6 years later, W just got his most recent blood test results back.  He has 0 heart blockage.  None.  It is completely gone.

Go ahead and mosey on over to the Fearless-Eating Recipes page, and take a look at what W is cooking up in the kitchen for us tonight.

Please let me know your thoughts and comments below.  Do you want to try eating a plant-based diet?  Do you need suggestions on how to make the switch?  Let me know what’s holding you back!