The Vicious Cycle of a Sedentary Lifestyle

So apparently, one of the worst things we can do to ourselves is to adopt a sedentary lifestyle.

The human body was meant to move. We feel better when we move. Have you ever noticed when you feel mentally exhausted and you decide to take a rest day, you tend to feel sluggish and end up losing your motivation for getting anything else done that day?  Lack of movement can ultimately lead to a poor lifestyle and heart disease.

Who knew that too much rest would be a problem, especially as we get older?

Sure, it’s ok to take a rest break when you’re feeling overwhelmed or stressed. But when one rest day leads to 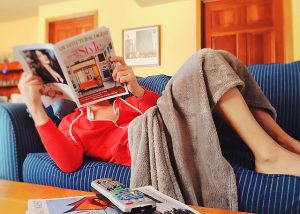 another rest day, a pattern starts to set in. We are such creatures of habit, that we easily adopt bad habits. But it’s a choice. We can adopt good habits just as easily.

I know it isn’t easy.

I struggle all the time with the internal duel going on inside of me between generally being lazy, and getting up and moving around. I seem to do pretty well during the summer months. I love to garden in my backyard, and I really don’t mind mowing the grass, so during the summer, where I live it’s May through September, I am generally quite active. But once the winter months kick in, around October through April, I seem to lose all motivation. And then after the holidays are over, I’m just fried. So, I’m trying figure out how to get motivated again once January rolls around.

There also seems to be a huge connection between inactivity and depression. There’s something about those dreary winter days that’s just flat out depressing. So, you spend a day or two laying around watching TV, catching up on your favorite shows, or watching movies. That’s ok occasionally, but watch out for that developing pattern. It’ll sneak up on you.

I thought about getting a light therapy lamp to help me overcome the slump of the winter blues. I keep reading about how it helps people with Seasonal Affective Disorder (SAD). If we don’t get enough natural sunlight, which is usually the case during the winter, our bodies don’t create enough Vitamin D, and then our sleep/wake cycle (circadian rhythm) gets messed up, and then we get tired, and then we have trouble concentrating, and then our energy level drops, and now there’s no motivation to be found anywhere.

I’ve been trying to decide which light therapy lamp would be the best, but the good ones aren’t cheap, so instead I bought myself a new pair of tennis shoes.

Even if it’s too cold to go outside, it still feels good to wear my new shoes inside. They’re nice and new and clean, so I don’t feel like I’m doing any damage to the floors, and they feel so good on my feet that I’m motivated to get up and walk around the house.

That usually leads to putting on some music, which leads to cleaning the kitchen, doing some laundry, and maybe a project or two around the house. Anything to get up and move around. Any activity is better than nothing, so try turning your household chores into your workout.

Do some side leg lifts while your preparing a meal in the kitchen, do some squats instead of bending over while you unload the dishwasher, do some lunges when you walk from one room to the next! It may look funny, but who’s watching? And besides that, who cares?

So, let’s try to get some good quality activity in throughout the day. Go outside into the sun if you can, but if not, put on your tennies and do some lunges when you walk through your house!